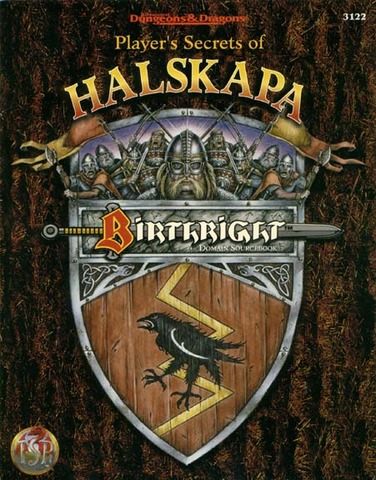 From the fishing villages of Fing Zjulor to the druidic city of Odemark and the great capital of Skapa Hjarring, this is Halskapa, the greatest kingdom of the Rjurik Highlands in the BIRTHRIGHT campaign setting.

King Bervinig, aged and ailing, a man who once united the discordant provinces of Halskapa, is abdicating his throne in favor of your character. Once, he could take almost any action and keep the support of the jarls who govern these provinces. Now, his mind debilitated and his strength ebbing, anything he does creates open conflict with them - and they are particularly outraged that he has designated someone from outsidet the group as his successor. Will the ambitious, competitive jarls allow the crown's choice to stand? Will they allow the new regent to live?

Halskapa, the original settlement of the Rjurik in the Highlands, with a long and proud history as a bulwark of human civilization in the north, is about to plunge into civil war - unless you can tame the jarls, stop the internal feuds, and prevent invasion by those who view the regent as weak and Halskapa as prey.

This BIRTHRIGHT domain sourcebook is designed for players who wish to take the role of the High Jarl of Halskapa. It can also be used by players taking the roles of provincial jarls, vassals of the regent, merchants, or adventurers in this Norselike domain.