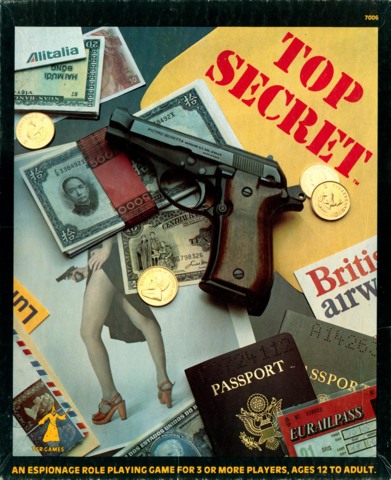 TOP SECRET is your passport to the exciting world of international espionage and intrigue. All the danger, glamour, and adventure of a secret agent's life await you as today's headlines or the more exotic spy settings of movies or television provide the backdrop for every mission. TOP SECRET is a role playing game where players assume the roles of various undercover agents, carrying out the missions assigned by the Administrator of their agency or organization (the gamemaster). The rewards can be great, but every mission is fraught with risk and peril, for the life of a spy is a dangerous one! The TOP SECRET game booklet is a sourcebook of information for the play and creation of all sorts of espionage adventures, and the imagination of the players is the only limitation on what is possible. The full range of spy activities is represented — including investigating, smuggling, rescuing defectors, infiltrating enemy agencies, and eliminating those opposed to the organization. The action can be set in foreign capitals or the secret hideouts of deranged supercriminals, but one thing is certain: no one will know the outcome until the game is played and true loyalties come to the fore! An introductory module allows players to get started with TOP SECRET after only a minimum of preparation, and provides a scenario setting for several game adventures Once the module has been used, players and Administrators both will have plenty of ideas for creating imaginative adventure missions of their own. Every element of the popular spy thrillers can be found in TOP SECRET — from vicious guard dogs and devious traps to secretive double agents, turncoats, and the inevitable charming and seductive enemy agents of the opposite sex! Even the far-out gadgetry of the spy trade is available for top agents on the most deadly missions. But TOP SECRET is not strictly a "fun and games" style of game, for it also boasts such realistic features as a voluminous listing of contemporary modern weapons with game statistics, and one of the most extensive hand-to-hand combat systems found in any game. TOP SECRET is flexible enough to allow whatever type of game is desired, and provide plenty of challenge and enjoyment in doing so. TOP SECRET includes everything needed to start playing your own adventures in the world of international espionage and intrigue: game booklet, introductory module, and set of percentile dice. The only other things necessary are a good imagination and a spirit of adventure!