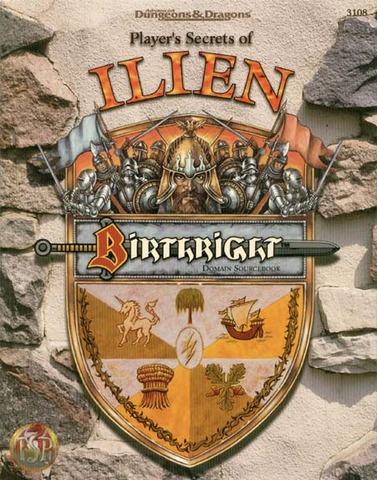 The benevolent wizard Count Aglondier of Ilien is dead! He has left control of his realm to you, his trusted apprentice. With the considerable power of realm magic behind you, your task is to govern Ilien and defend it from those who wish to conquer your small domain.

A full-color, eight-page foldout cover containing maps of the domain and important locales.

The history of Ilien, from its origin steeped in magic to the recent suspicious death of Count Aglondier.

Information on the Free City of Ilien, the second largest city in all of Anuire.

Rumors, secrets, and plots that help and hinder the new regent.

This BIRTHRIGHT domain sourcebook is designed for players who want to take the role of the wizard king, or play a guild leader, a lieutenant, or a servant to the king.