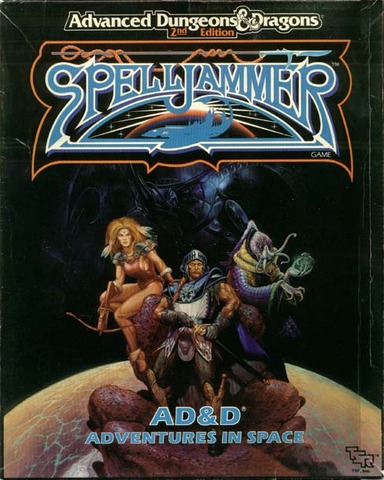 Multitudes of worlds wheel through Wildspace. The crystal shells that encase them bob and drift in a turbulent, rainbow ocean which fills all the cosmos. Sturdy merchants, bold pirates, and daring explorers venture into the great, unknown vastness of the universe, seeking wealth and adventure.

The SPELLJAMMER Game puts you in command of a fantastic ship capable of spanning the tremendous distances between planets. Graceful elven flitters, stately illithid galleys, deadly beholder tyrants, and the awesome Spelljammer itself carry trade, emissaries, and heroic action throughout all the worlds of the AD&D game.

Two 96-page books describing the mysteries of travel through wildspace, how to design ships for your adventurers, new spells, space monsters, intelligent, star-spanning races, and the lore of wildspace;
Four maps showing planetary orbits, the gigantic Spelljammer, an asteroid city, and a tactical grid for space battles;

Full-color, stand-up pieces for playing out tactical battles and encounters in space.