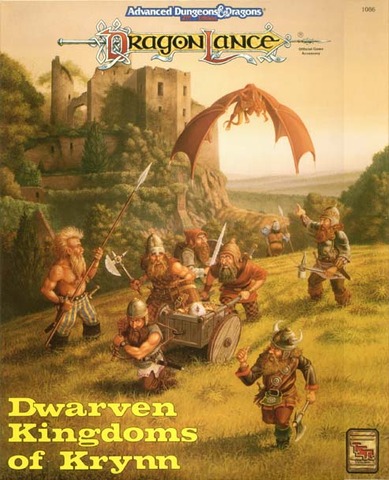 Among all the peoples of Krynn, none build such lasting structures, nor labor so diligently to create and expand their domains, as do the dwarves. From the initial dank caverns of Kal-Thax to the vast and multi-tiered metropolis of Thorbardin, these sturdy folk have delved a series of magnificent dwellings.
Some of these domains have been torn into ruin by the oft-wrenching history of Krynn, while others continue to grow and flourish, reaching glories undreamed of a generation or two before. Yet they all have their places along the River of Time, and whether ancient or modern, they each illustrate the determination and skill of these sturdy dwarves.

From the Observations of Astinus

At last, the secrets of the dwarves revealed!

The two booklets contained in this boxed set hold information that has never been collected in one place. Songs of the Loremaster, for players to read, chronicles the history of the dwarven race on Krynn, from their first appearance on the planet's surface to their withdrawal following the Cataclysm. A World iin Stone presents each kingdom in turn for DM's eyes only, describing how each cavern was delved, what each clan's world-view encompassed, and what each kingdom's fate has been.
The four mapsheets are invaluable aids for those who wish to campaign in these hollowed halls; modular styling allows endless variations of dwarven cities, large and small.

The Tales of the Lance boxed set is suggested, although not required, for full enjoyment of this accessory.