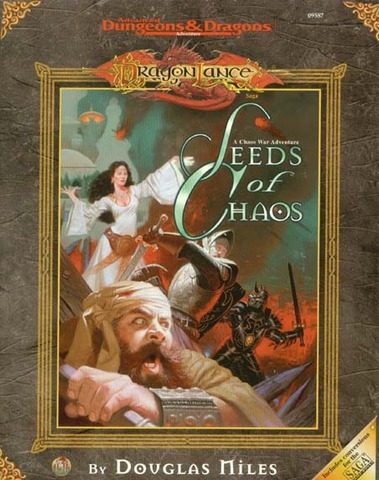 Krynn swelters in the grip of unnatural heat - a summer so dry and scorching the very world seems ready to burst into flame. Across this baked landscape, Lord Ariakan's armies of Dark Knights sweep unchecked. Finally, the great city of Palanthas, the jewel in Ansalon's crown, awaits the onslaught of unstoppable legions.

In Seeds of Chaos, players have their choice of roles:

The proud Knights of Takhisis, dark paladins who have sworn a blood oath to their lord. Adhering to strict codes of honor and discipline, they lead the attack against the pristine Palanthas; or

Defenders drawn from the populace of that imperiled city, waging the battle with whatever tools and tactics come to hand.

In either case, the characters ultimately learn of their true enemy - a horde of chaos creatures lurking unseen beyond the northern horizon, poised to render every wordly conflict obsolete.

Seeds of Chaos uses the AD&D game rules and provides information suitable for running the adventure using the SAGA rules as well. It is the start of a new adventure series that details the epic battles of the Chaos War, described in the novel Dragons of Summer Flame by Margaret Weis and Tracy Hickman. This series can serve as a stand-alone campaign or as a crossover to introduce classic DRAGONLANCE players to the current FIFTH AGE setting.