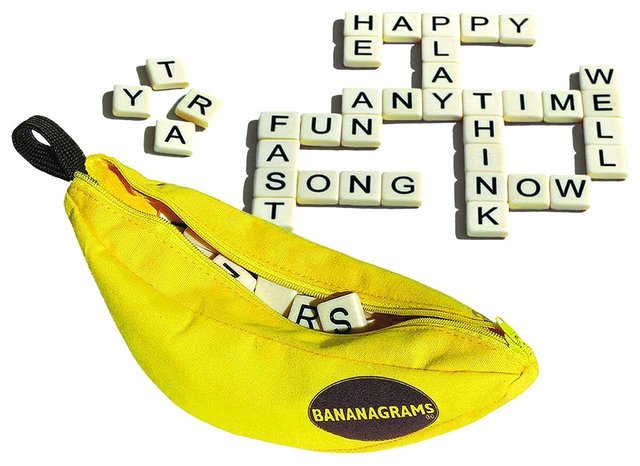 A Scrabble-like game without the board -- much like Pick Two!, but without the letter values.

Using a selection of 144 plastic letter tiles in the English edition, each player works independently to create their own 'crossword'. When a player uses up all their letters, all players take a new tile from the pool. When all the tiles are gone, the first player to use up all the tiles in their hand wins.

There are also variants included in the rules, and the game is suitable for solo play.

There is also a Double Bananagrams version, twice as big and with twice the tiles.
Packaged in zippered cloth bananas, which hang by their stems on display rack banana trees.
"Ivory-like," very tactile, heavy plastic tiles with rounded corners.
Now imitated in not one but TWO fruit-shaped cloth bags of tiles. Both apples - which lack the ban-anagrams pun.
Available at bookshops, game stores, toy stores and even mass market stores like Target.
There's a Bananagrams book out now.
Similar to Pick Two, Syzyzgy, Snatch and other letter tile games.