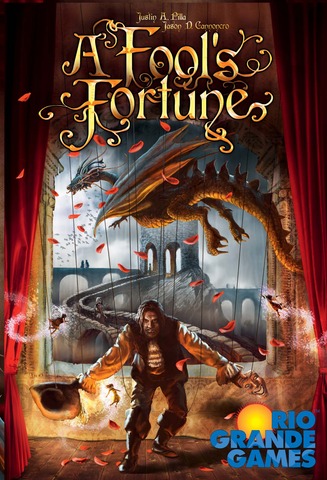 Game description from the publisher:

Come play a game of mischief, magic, mirth, and lore. Delve into the Book of Fate to reveal mysterious fortunes: realms near and far, resources wondrous and wild. Cast your lot with a crew of assorted (and sordid) characters. If you pay your dues and play your hand right, you may just win a fool's fortune.

A Fool's Fortune is a two- or three-player card game in the tradition of Rummy in which players race to make sets – but with several wily twists. Found within the deck of 77 unique cards are five suits of Fortunes and a host of talented characters for players to put to use.

A Fool’s Fortune has 3 levels of play, called Acts.
Each Act is a stand alone version of the game with its own unique strategies.
The rules of each Act expand upon those of the prior.

~ACT I: the Page’s Game~
The introductory level to A Fool’s Fortune. Players race to complete sets of Fortune cards, using their Character cards to acquire discarded Fortunes.

~ACT II: the Baron’s Game~
Characters gain several new Abilities which will allow players further access to the discard pile, the draw deck and to a rival's Fortunes.